Academic Freedom and Responsibility Toward Society

Das 12. Forum on the Internationalization of Sciences and Humanities im Rückblick.

Who Decides What Science We Do? Proceedings of th 12th Forum on the Internationalization of Sciences and Humanities

Academic freedom is a necessary precondition for science and research to thrive. With the rise of illiberal and autocratic governments in several countries around the world, academic freedom is increasingly under threat. The consistently high demand for fellowships in the Philipp Schwartz Initiative, a programme which the Humboldt Foundation launched in 2015 with the support of the Federal Foreign Office to provide temporary shelter for at-risk academics, is sad testimony to this.

But academic freedom involves more than the absence of censorship, forced dismissals and imprisonment of academics. Worrying trends such as growing dependence on third-party funding, increasing pressure to produce publication output or being expected to demonstrate immediate impacts may also restrict the freedom of researchers. At the same time, taxpayers have a legitimate right to demand accountability from scientists and scholars whose research they ultimately fund.

In November 2018, the International Advisory Board of the Alexander von Humboldt Foundation convened the 12th Forum on the Internationalization of Sciences and Humanities under the title “Academic Freedom and Responsibility Toward Society – Who Decides What Science We Do?”. The Forum discussed various aspects of academic freedom in a wider sense. Leading scholars, science managers and representatives of funding organizations from across the globe gave their input to these questions.

Academic freedom is essential in order for scholars and scientists to pursue their societal mission – but society has a legitimate right to see its interests taken into account.

The primary responsibility of scientists and scholars is to provide society with the best possible knowledge. Researchers can only fulfil this responsibility to the best of their ability if they are allowed to go about their research as freely as possible. But that does not mean that they should be totally unaccountable to citizens or the democratically legitimated actors who represent them.

When the academic freedom of individual scholars and scientists is infringed, or when individual institutions are under attack, the academic community – including funding organizations – must protest and do their utmost to help the affected individuals and institutions. In addition, the wider implications of such severe infringements of academic freedom must not be forgotten. Academic freedom is a measure of general freedom, and its infringement causes harm to all members of society, be they students or citizens benefitting from the knowledge created by researchers.

Self-censorship within academia is probably more widespread than the censorship visible to outsiders.

Increasingly, scholars are ‘at moral risk’. International outrage at infringements of academic freedom is often concentrated on a small number of high-profile cases when academics are fired or imprisoned. This leads to underestimation of the global threat to academic freedom. There are justified reasons to assume that scholars and scientists in countries with authoritarian governments increasingly resort to self-censorship in order to avoid sanctioning. But also in non-autocratic societies, researchers are ‘at moral risk’ when they choose the path of least resistance.

Threats to academic freedom do not just emanate from authoritarian governments.

There are worrying developments within the global science system which limit individual researchers’ freedom to decide what to research and how to go about it. Examples of such developments are growing dependence on third-party funding, the pressure to succumb to the logic of quantitative measures of publication output, or funders requiring the demonstration of immediate impacts. When these developments are discussed in other contexts, their effects on academic freedom should be considered as well.

Academia has to become more acknowledging of its embeddedness in democratic structures – including all the participatory aspects characteristic of democratic processes.

Scientists and scholars must enter into a dialogue with society, remain open-minded to justified challenges, even from non-specialists, and keep debating the role science and research should play within societies. This is necessary in order to secure academic freedom in the long run. Simply showing research results to the public or trying to educate the public on how science works will not suffice, even though of course it remains important to foster scientific thinking within society (especially in children).

Academic freedom is a prerequisite for science and scholarship to thrive.

This holds true despite differing definitions across societies of what academic freedom should entail.

In the short run, one of the best ways to secure academic freedom may lie in fostering international networks of scientists and scholars.

Networks can lend protection and empowerment to individual researchers whose academic freedom is infringed. The crossborder nature of international networks can grant freedom from encroachment by national regulation, and can enable individuals by spreading resources, such as data or technical equipment, that may otherwise not be accessible to them.

The International Advisory Board of the Alexander von Humboldt Foundation will continue to explore the power of academic networks. 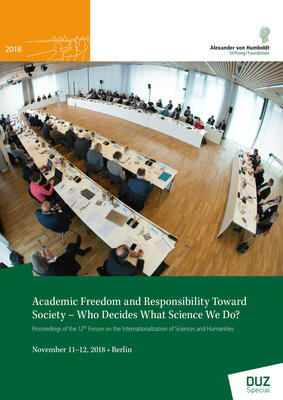 The complete documentation of the 12th Forum on the Internationalization of Sciences and Humanities is available here: